This is a post about the quirky little things that happen in Habanero.  It's such a different world than my ordinary, quiet life in Longview, WA.   Sometimes I just have to shake my head and laugh.

Since we had a large mission team coming to Habanero to build the Teen Center we had to purchase more plastic chairs.  The chairs are a necessity in Habanero because we sit outside so much and the chairs are easy to move around. Plus they are cheap.  About $10 each.

Now you have to be careful with the chairs because not everyone can afford them and if you leave them outside they might grown another set of legs and run away.  Over the years I've came up with the idea of spray painting the legs of the mission house chairs.  That way it is obvious if someone else is sitting on a run-a-way chair.  We had 10 black leg chairs and now we have and additional 15 green leg chairs.

So one afternoon I am painting the legs of the chairs in the street when Temo comes over and asks if he can help me. I'm more than happy to let him help as I have a list a mile long on my to do list.  I lock up the house and go over the school.

An hour or so later I come back to the house and as I walk around the side of the house I see Temo's name spray painted on the cement blocks which will one day be the inside wall of the garage.  I'm not happy with the graffiti.

I see Temo, Maconi and Adrian across the street smiling.  I go over and say, hey what's the deal, did I give you permission to paint my house?  They laugh and point the finger at Maconi and say "he's an artist".  Obviously they don't think it's a big deal and in fact think it is funny.

So I say, yeah, I'm an artist also.  How about I spray paint my name on the gas tank of your motorcycle?  Temo looks at his beautiful motorcycle and says no, no, no.  Adrian laughs and I say,  Hey Adrian how about I spray paint my name on your grandmother's house?  Would that be okay?  Adrian looks serious now and says, no that wouldn't be good.  I said no it wouldn't be good because it would be very disrespectful to paint someone's property without their permission, wouldn't it?

The three young men 18, 20 and 26 years old hung their heads in shame.  I kinda felt bad for a moment but I let that pass.  They didn't have the right to spray paint on another person's property and it doesn't matter what country it is.

Later that night I bought them a cold refresco and told them I still loved them.  All was well.  Little did I know that a week later I would ask the "artist" to write on the teen center for our team photo!  Everything happens for a reason............ 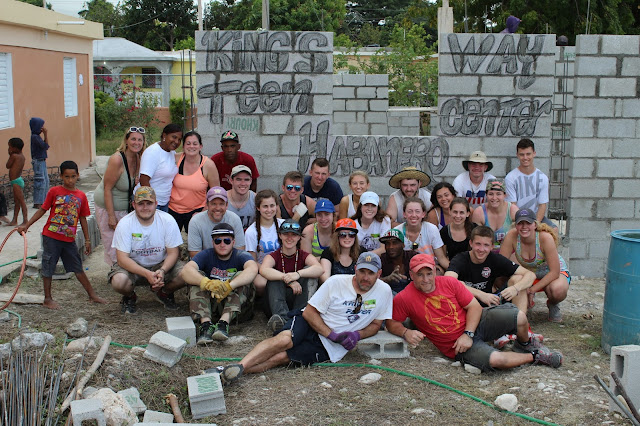 Posted by Evergreen4kids at 5:54 PM