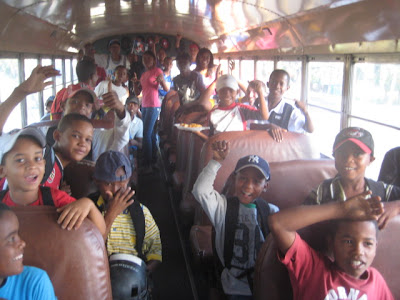 Organized? Baseball has come to Habanero! A coach is coming on Tuesday and Thursdays to coach the children. There are three teams of differing ages playing baseball and they love it! It is every Dominican boys dream to play for a Major League in the US. They work very hard practicing in the hot sun with very little equipment. They are rag tag teams with big hearts.
The coach has asked us to bring bases and equipment in July. Please search your attics, closets and garages for bats, balls, bases, gloves and cleats that we can take with us for the kids. The coach arranged for a bus to come and take the kids into Barahona (the big city) for a game. They loaded the bus up and then went to the beach afterwards. What a great trip it was for the kids. The icing on the cake was – Habanero spanked Barahona for two games! Go Habanero!
Posted by Evergreen4kids at 9:21 PM No comments: 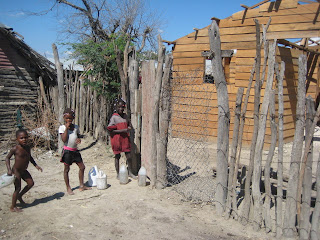 I spent yesterday afternoon looking for a cell phone for Benita’s father, Roberto. I wanted to get the best price, but the phone still needed to play music as he requested. I finally found one for $25 that included activation and FM radio. Today returned to Batey Cinco (5) to deliver the phone and see how the new baby is doing.
A Dominican “Batey” is a small village bu...ilt up around and on sugar cane land. The original inhabitants were illegal Haitians willing to do the back breaking work required to harvest the sugar cane. The villages are poor with very little services available such as water, sewer ad garbage. The people now are 3rd and 4th generation Haitians born in the Dominican, but without proper papers. The villages stay poor and the people continue to suffer. These villages have bad reputations for crime and are not the place one wants to hang out in for too long. They are so ill thought of they haven’t even been named. Just numbers along this sugar cane railroad route…….Batey 1…..Batey 2…..Batey 3.
Wilbur is doing well. Benita is quiet and stays away from both the baby and the adults. I’m not sure what she’s thinking or what’s she’s been through but it’s clear she is not interested in being there. We’ve brought Wilbur a new baby bottle, formula, liquid vitamins and some clothes. We’ve also brought the adults some clothes, rice and oil. Roberto is happy with the cell phone and the mother is happy with the food. Tonight all is well in Batey Cinco.
Posted by Evergreen4kids at 9:17 PM No comments: 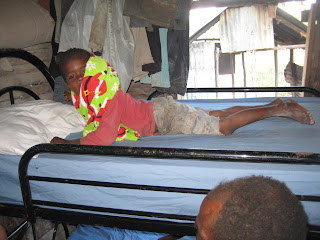 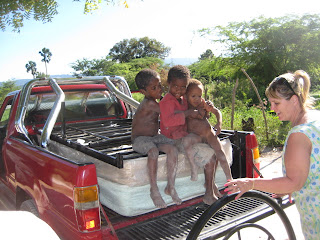 The Sunday school children at Faith Family Christian Center saved up their offerings to get a set of bunk beds for Josue, Estephen and Samuel. We loaded up the truck and took them to the children. The boys immediately started climbing on them and laughing and playing. So much simple joy with something we take for granted. Samuel the youngest had still been sleeping with his parents, but Josue 5 yrs old and Estephen 4 yrs old had been sleeping on the floor with just a torn raggedy blanket. Thank you to the children of Faith Family for providing the beds for these little ones! Isn't it amazing what we can do when we put our minds to it! Together we can relive a lot of the world's suffering. Let's do it!
Posted by Evergreen4kids at 9:09 PM No comments: 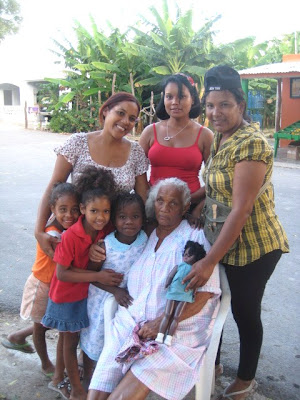 It's been like ground hog day here. Blue sky sunshine and children frolicking every day!
The Americans arrive tomorrow – I’m excited about having such great company as the Miller family. I can’t wait to speak English! Haha! Funny how small things mean so much when you don’t have them. I miss full conversations – I only know survival Spanish, which consists of single words not full sentences with lots of hand signals!
We've searched 5 villages for Benita and have not been able to find her. But Yanet heard word tonight that Benita’s father Roberto is working in another village about 20 miles away. We plan to go look for her on Tuesday at 2pm. Praying she is there and we can see her, maybe bring her home, but at the very least let her know we love her and miss smiling face.
Posted by Evergreen4kids at 6:12 PM No comments: 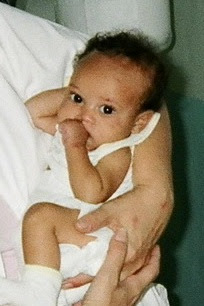 I am sick today and have stayed mostly in the house resting, reading, reflecting….. it’s hard to explain life here. I have little food in the house now that the team and Scott are gone. Life is one day at a time here, and as my prayer goes, so does theirs, “Give us today our daily bread”.
Not feeling well and not up to the chore of driving into Barahona to shop. Thank goodness the team left some Cliff bars to nibble on. So tonight’s dinner consisted of soda crackers with a piece of left over ham I had stashed in the freezer. As I opened the crackers I wondered at the fact that not one single cracker was intact. Opening crackers at home I always expect the quality I am used to, fresh, perfect squares, here I always hope for just one that is not broken! Still, dinner is humble, filling and enough. And more than some will eat tonight.
Ramona stopped by and we remembered together about our first meeting at the clinic. I told her I’d come visit her and she told the whole village. No one believed her because no Americans had been here before. We talked about Gerson’s death, the sadness that brought us together and our faith in knowing God’s hand was on us. We believe Gerson and the school in Habanero are all part of God’s great plan. There is comfort and peace in that faith tonight.
Posted by Evergreen4kids at 6:08 PM No comments: 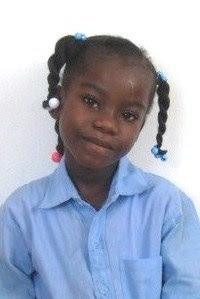 We left America January 19th and already completed our dental mission in Haiti and the Dominican Republic. We served over 200 needy people, most of them in pain. The American team is already back home and Scott will leave Habanero tomorrow. Lots of work has been done, but my heart is saddened and missing Benita.
Benita’s father left her in Habanero when she was just 4 years old and she has been in Yanet’s care and supported by ...Evergreen4kids for the last 2 years. Benita became the Little Princess of Habanero, taken in by the people, loved and adored. I saw her blossom from a frightened, shy little girl to one with her head held high and full of spunk. In December her father came and asked for her to spend the night with him in another town, with no legal rights Yanet had to let her go. He never brought Benita back. We have searched four villages so far and have no word of her. We pray she is safe and well cared for. I personally pray to see her one more time so I can tell that wherever she is our love travels with her over dusty roads and tin roof shacks…………. And we wait with open arms for the day she comes home.
Posted by Evergreen4kids at 9:03 PM No comments: 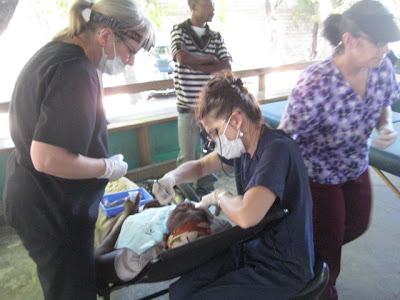 The dental team flew into Port Au Prince and Scott and I met them in Fonds Parisen a small Haitian village just across the Dominican border. There was plenty of work for the dental team and they put Scott and I to work as well. Scott cleaning instruments and myself helping Marika triage the incoming patients. The days were long standing on the concrete porch where we set up our mobile clinic. The patients were orderly and patient with us and so very happy to see a dentist! We were able to relieve a lot of pain and suffering.

We left Haiti after helping over 200 patients and drove across the border in the Dominican. We set up the clinic in a poor barrio in a small town called Cabral. We worked in a yard under a tree for shade. The people were thankful for our out reach to them and invited us back next year. It was hot and dusty, but all the team members were troopers, serving everyone that came in with a smile. I estimate we saw 50 patients there before moving on to Habanero.

Habanero is our home base and everyone was happy to see the Americanos arrive. We spent the evening having dinner of rice and chicken and catching up with old friends. The dental team had time to visit some of the homes of students. This was the dental team’s fifth trip to Habanero but the first that allowed time for visiting.

Three of Evergreen4kids’ Board Members were on the dental team. I was happy there was finally time for them to see the entire village. The mission house where we stay is in the wealthiest area of Habanero, with cement block homes that even have toilets inside. The rest of the village is much poorer, they live in wooden houses with tin roof and shared outhouses. We went to Josue’s house, which is one of the children we provide monthly assistance to. The children are used to visits from Scott and I, but were very shy with the entire group being there. Still it was a treat for them to know the Americans care enough to come to their home. And I think it was an eye opener for those who'd never been outside the school or mission house.

I can see the impact Evergreen4kids has had on this small village over the last few years.
The people are much more industrious, there are vendors on the street and fruit trees producing food for the table and I believe the people have a glimpse of their own potential and hope for the future. Change is slow and our consistent presence is necessary. We are impacting this
next generation of children. Slowly, but surely I see Habanero blooming………
Thanks to all the many hands that help plant the seeds…….
Posted by Evergreen4kids at 9:41 PM No comments: