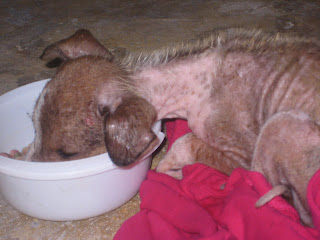 
Today the most awful thing happened.  Scott and I were returning from Barahona with materials for one of the fence gates.  In Come Callao off on a side road I saw two little girls.  One of them had a puppy with a rope around it’s neck and she was swinging the puppy in a circle around her head.  I could hear the puppy crying.  I yelled for Scott to stop and turn around.  As we approached the girls the older girl ran away, she clearly knew by the looks on our faces she was doing something wrong.  The other little girl, only about 5 years old just looked at us like, “what’s going on?”  I don’t think she understood the cruelty of what they had done.  The puppy lay at the end of the rope with blood coming out his mouth.  Scott picked him up and we drove away.  All I could do was cry.  I cried for the puppy that I though would surely die in the back of the truck and I cried for the children that live here that aren’t taught compassion for all God’s creations.  When we arrived home the pup was still alive and Scott said he thought he might make it, so off Scott went with a bunch of boys in the back of the truck to try to find a vet in Barahona.  He came home later with good news.  The vet said the pup would live but he was very sick.  He was given a shot, medicine to take everyday and a shampoo to clean him up with.  He was full of bugs and ticks.  Ugh!  Poor thing.  Scott, my wonderful husband and lover of all dogs, washed him and fed him and locked him in one of the bathrooms at the school.  I decided to name him Vivir which means “to live” in Spanish.  We are praying he will grow up strong and he will be out watchdog at the school.  Yanet and I hope what happened today can be transformed into a learning experience for the children at our school.  The children will love having a dog at the school and Vivir’s story will be told to the children each year.  We pray he grows strong for them.
Posted by Evergreen4kids at 12:53 PM