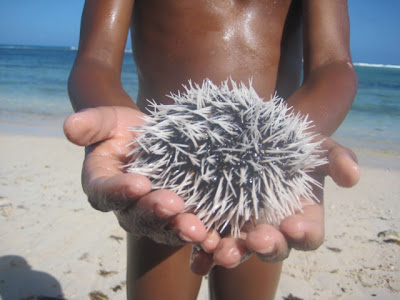 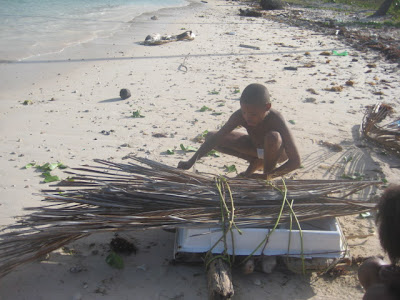 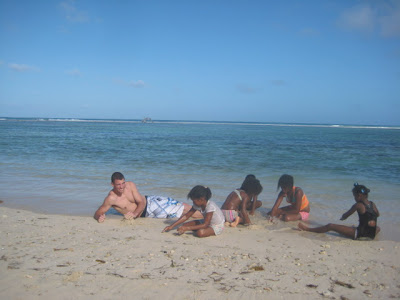 I am still catching up on all my adventures during this last mission trip to the Dominican. Olivia, Devin and I went to the beach and were immediately surrounded by children. Before leaving the mission house I had stuffed a few baloons into my beach bag and we blew them up and watched was the children happliy ran after them as the wind blew them down the shoreline. As all the baloons soon popped and the novelty quickly wore off I saw the children discovering their own ways to have fun. They didn't need a thing from the Americanos!
Well, almost.............first Devin became their very own beach toy as they swam after him, climbed on his back and hung from his arms. Then they all began building sand sculptures. It was interesting to watch as 18 year old Deving became one of them, laying on the beach and playing in the sand. Even Olivia and I reverted to our inner child and frolicked in the calm water with the children.
Although I'm not found of sea urchins I was amazed at their beauty when a young boy brought one up for me to see and touch. A beautiful amazing piece of natural right there for us to enjoy!
Soon another little boy found his inner Robinson Crusoe as he began to gather washed up items to build a raft for his afternoon get-a-way. As he tried to board his water craft it slowly sank to the bottom. But, not to be discouraged he drug it out of the water and began to re-build. I was so intrigued with his work that I began to help. We were pulling up vines to use as rope to criss-cross the driftwood and palm leaves togerther. We also incorporated a plastic piece of refrigerator, which the boy was very keen on using. As we put it in the water you should have seen his face as he discovered this rig was a floater!
What a wonderful day we had away from the village and the cares of world. I invite you to come with us on a mission trip one day and experience this wonderful Dominican culture.
Posted by Evergreen4kids at 2:57 PM